How a plasma cutter works 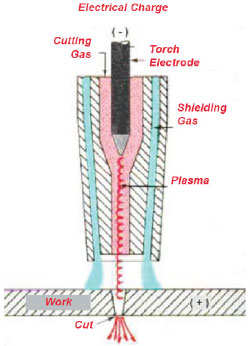 Plasma cutters work by sending an electric arc through a gas that is passing through a constricted opening.  The gas can be shop air, nitrogen, argon, oxygen. etc. This elevates the temperature of the gas to the point that it enters a 4th state of matter.  We all are familiar with the first three: i.e., solid, liquid, and gas.   Scientists call this additional state plasma.  As the metal being cut is part of the circuit, the electrical conductivity of the plasma causes the arc to transfer to the work.

The restricted opening (nozzle) the gas passes through causes it to squeeze by at a high speed, like air passing through a venturi in a carburetor.  This high speed gas cuts through the molten metal.  The gas is also directed around the perimeter of the cutting area to shield the cut.

In many of today's better plasma cutters, a pilot arc between the electrode and nozzle is used to ionize the gas and initially generate the plasma prior to the arc transfer.

Other methods that have been used are touching the torch tip to the work to create a spark, and the use of a high-frequency starting circuit (like a spark plug).   Neither of these latter two methods is compatible with CNC (automated) cutting. 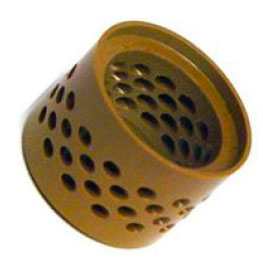 This photo shows the swirl ring which is above the electrode and causes the plasma to turn rapidly as it passes.

While these parts are all referred to as consumables, it is the electrode and nozzle that wear and require periodic replacement.

Today's CNC units use either expensive limited production computers made specifically for running burning machines, or personal computers adapted to run the machines.  Both provide the same cut quality and production speed. In CNC cutting, you arrange your shapes on the computer screen and cut them automatically, without having to touch the material. CNC software lets you program pauses for piercing, scale up or down in seconds, set acceleration and deceleration at corners, and other functions not possible with electric eye units.